What’s are the differences between hawks, falcons, eagles, osprey and kites?

Let’s put it this way: Difference between Eagles, Kites, Hawks and Falcons. Because, Hawks and Falcons are very similar in terms of size and looks.
But the first 3 belong to family Accipitridae, while Falcons are of a different Family, Falconidae. Recent studies in Genomics show that Falcons are kins of Parrots!
All of those are birds of prey, called Raptors in Birders’ lingo. And these hunt during the day – diurnal predators.

Size Difference:
Of these birds, Eagles are the largest with size between 60-70 cms and wing span of more than 2 meters. Huge!!
Then come the Kites with size range of 50-60 cms.
Hawks are smaller, sized between 30-35 cm.s. And Falcons are smallest of the lot, with size of 25-30 cm.s. 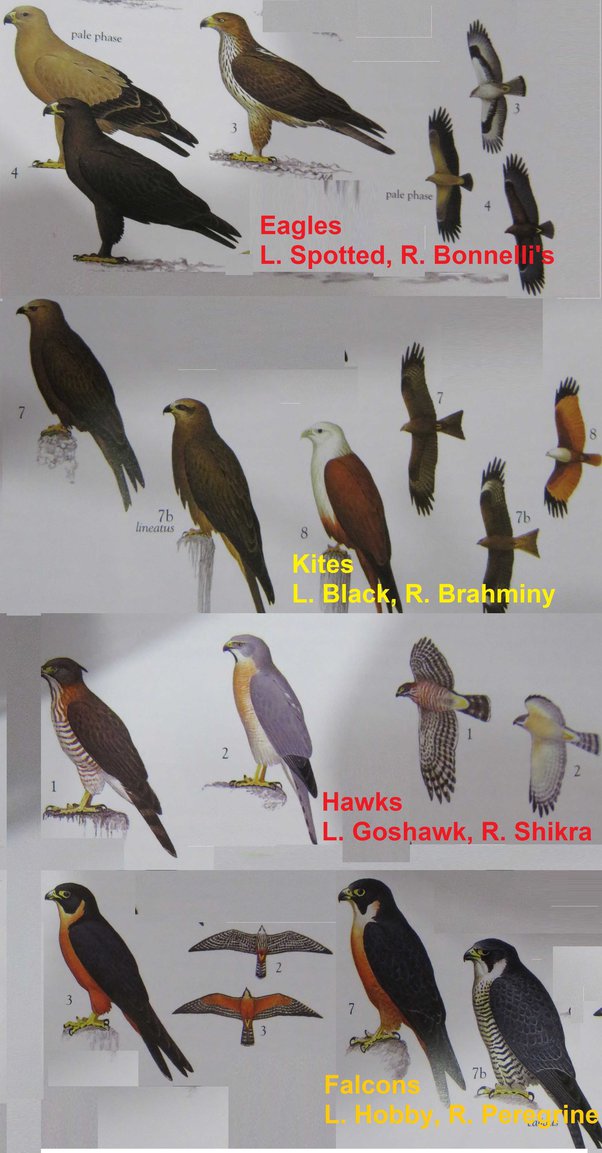 Differential Characteristics:
Eagles are majestic birds. Huge spread of wings, quite rare to spot. These are strong creatures, can lift heavy preys.
Kites are common raptors, now thriving in cities and towns on account of scavenging food habits. The raptors that you see circling on the high skies are Kites, mostly Black Kites.
Hawks belong to Genus ‘Accipiter’, i.e. those are exceptional hunters. Their eye-sight and hunting abilities are incomparable. These are used in Falconery and are called Shortwings in Falconery.
Falcons are of Genus ‘Falco’ – Called Long-wings in Falconery. The USP of these birdsa re their speed. Peregrine Falcon is the fastest flying birds, exceeding speeds of 300 Km./h. Indian Hobby, Kestrel, Merlin and Peregrine are Falcons found in India.

Silhouette Identification:
The flight silhouette of these birds are quite distinct and those look like this:

The wings of a Falcon are strong and comparatively most curved and pointed for sharper turns, rapid ascent & dives, greater speedwork. 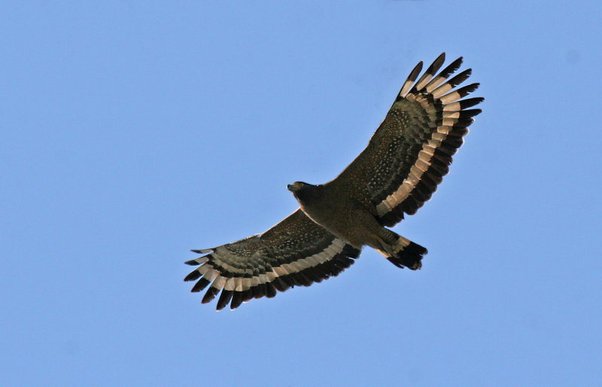 Shape and Identification:
This is the most tricky part in Birding – Identification.
Here are few clues as to how these birds look if made to sit side-by-side:

# From a cursory look it would appear that these birds look quite different.
# Eagles have well defined nape-angle and very stout legs.
# Kites are birds which have a v-shaped tail.
# Hawks and Falcons look similar. Quite smaller, but faster raptors.

A minor difference between the 3 Accipitride (Eagle-Kite and Hawk) and Falcons is that the former three hunt and kill with their feet only, while Falcons sometimes use their bills to finish the kill if the fatal blow to spinal cord from talons does not render the prey stunned/lifeless. There are differences of Habitat, Feeding habits, Hunting habits etc. too among these birds. Hope that’s enough for now. A marvelous Crescent Serpent Eagle (CSE): Eagles have wonderful markings under their wings.

Thanks for the A2A.
You did leave Buzzards, Harriers, Ospreys and Bazas from the list.

Uh-oh… you asked me about Osprey. I’m afraid I’m going to have to go long on ya. Just so happens[...]

Birds of prey are fascinating creatures not only to birdwatchers but to anyone fortunate enough to lay eyes on[...]

I am Oliver. At age 26, I quit my job to travel the world alone. Four years later, I’m still traveling — 15 countries and 7 continents! My goal is to show YOU how you can travel the world on your own — easily, safely, and adventurously. Contact With Me By Mail.