Is an Osprey a type of hawk?

Uh-oh… you asked me about Osprey. I’m afraid I’m going to have to go long on ya. Just so happens this is my favorite raptor. Here is my favorite photo. We are replacing a young Osprey who fell out of his nest that was balanced on top of this sign in the middle of the lake. He couldn’t get out of the water, so he did the breast stroke to shore, and luckily somebody found him. He almost drowned. But after we nursed him back to health, we took him out on the boat, and that big guy balanced on the bow (he’s a 6′8″ tall French Foreign Legionnaire!), then the girl on his shoulders, then I handed the young Osprey up to her as we all precariously balanced, and she barely lifted him back to the nest. I call this my Iwo Jima Osprey cuz it reminds me of that flag raising photo. Finally, back with his sister, while mama watches from the air above us. 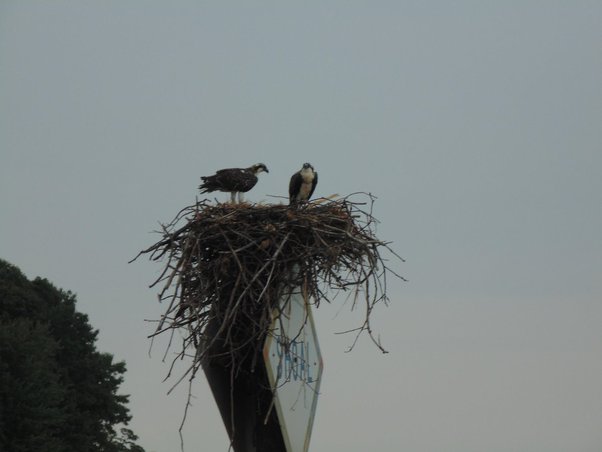 Here he is as I readied him for the boat trip back. Just a youngster, as you can tell from his orange eyes. They’ll be turning to golden eyes after his first year. 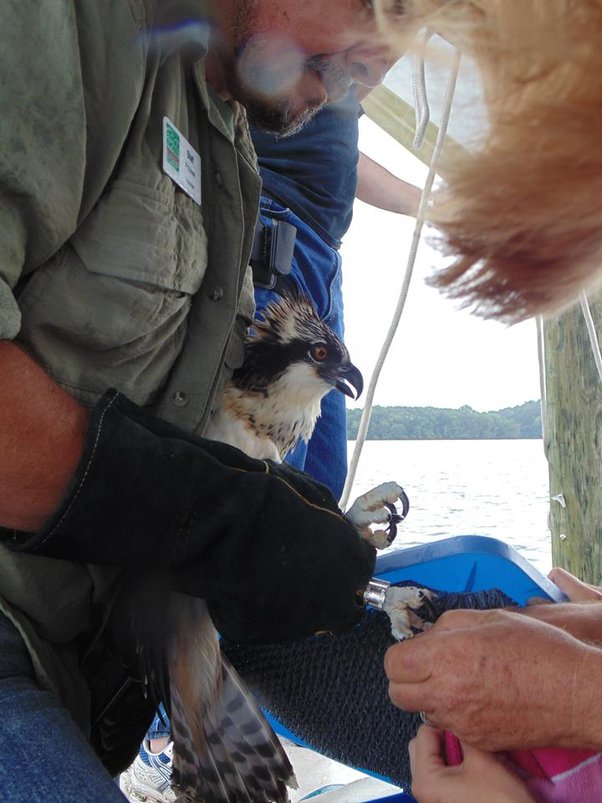 Anyway… PLEASE don’t ever ask an Osprey if he is a type of hawk. They will be so insulted, that they’ll turn around and all you’ll see is this… 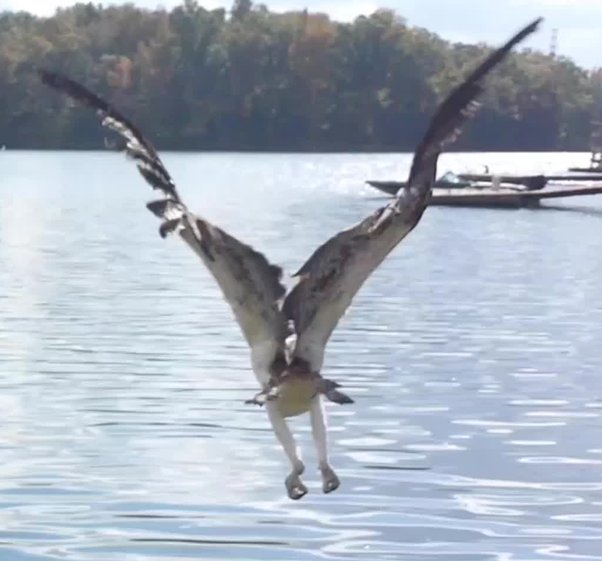 That one is Cyrano, by the way. Getting set free after nearly a year in hospital.

But, you can be forgiven, because their other name is “Seahawk”. Yes, like the football team. It’s a misnomer though. They are not hawks at all.

I’m a big fan of the Osprey for so many reasons. They are unique in so many ways. They’re a special kind of bird of prey. Not related to any other bird. Not by millions of years, anyway. It’s an amazing bird! It has certainly had time to make many specialized adaptations, as Osprey fossils have been dated from the middle Miocene Epoch, which is about 13 million years ago! They have done very well for themselves, indeed.

Their scientific name is Pandion haliaetus. That means the species is haliaetus and the genus is Pandion. If you go one more step up the taxonomological ladder, you get to their family name, which is called Pandionidae.

Not only are Osprey the only member species in the genus of Pandion… the genus of Pandion is also the only member genus in the family of Pandionidae. This situation is quite rare in the Animal Kingdom. Therefore, if we were to suddenly lose all Osprey, not only would we lose an entire Species on Earth. We would also lose an entire Genus on Earth. AND we would also lose an entire Family on Earth! That kind of drastic, permanent pruning of The Tree of Life is never a good thing. It would be a great loss to our planet. Especially after 13 million years of Osprey existing on planet Earth.

They are different from all other raptors in so many ways. I consider myself very fortunate to be able to interact and help these wonderful prehistoric birds.

Start with the extra long legs and wings, above. Longest legs in the business. They need those long legs because when they dive for fish it allows them to put their head down, between their legs to aim… like a guided missile, but they need legs long enough to extend past their face when they double over all tight like that and laser focused.

Much different from other fishing raptors like eagles, who just skim the water surface at a shallow angle.

The pic below shows how quickly all this happens. 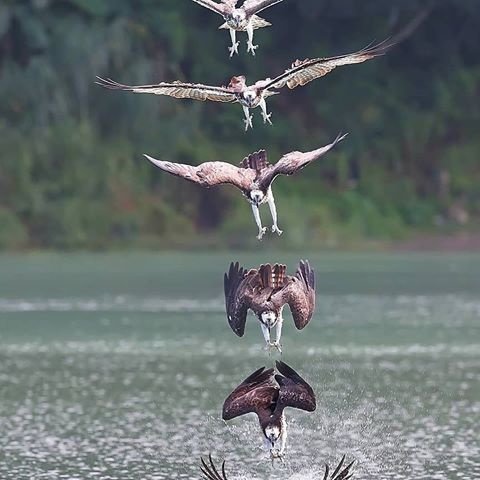 They are quite feisty. Everyone wants to mess with them while they fish. So, sometimes they have to chase away herons: 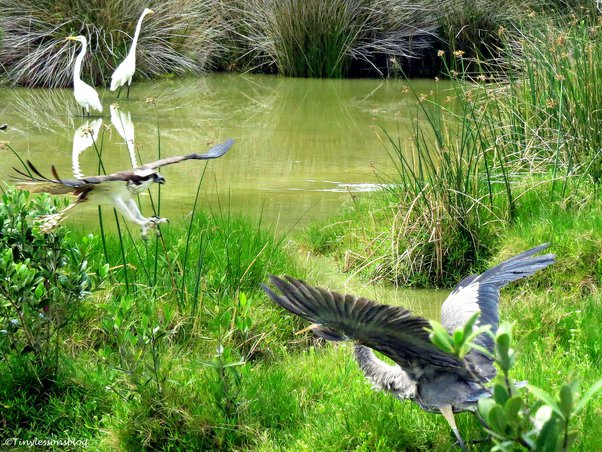 Sometimes they are the ones being chased by herons: 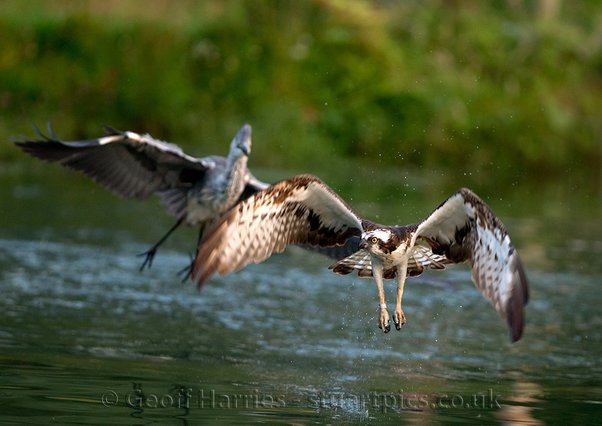 And you can always count on them being harassed by eagles, who are trying to steal their hard-earned fish. However, they don’t back down to the larger eagles. Osprey get in their licks whenever they can: 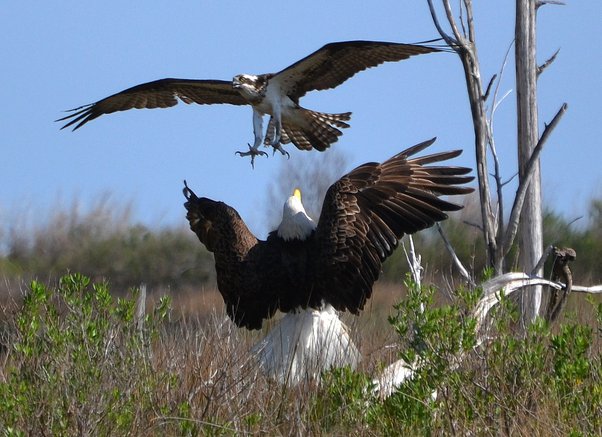 Next, their feet… you’ll notice how very curved their talons are. Like fish hooks. Which makes sense of course.

Much more hooky than the other raptors. This gives them a greater chance to grab and hold that fish, where a straighter talon may have lost it. Sometimes, even two fish! 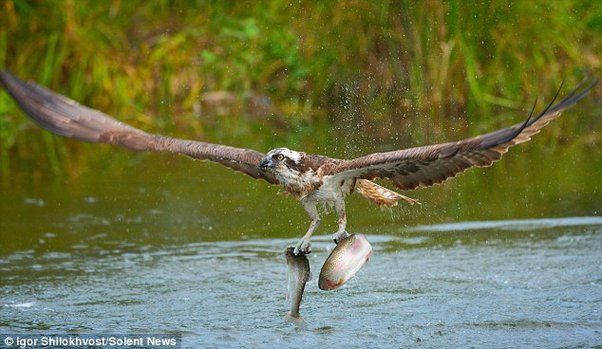 THAT’S what 13 million years of practice does for ya! They are the fishing masters. If you want to read all about their fishing prowess, you can do that here: Stefan Pociask’s answer to Which raptor is better at catching fish, the Osprey or the Bald Eagle?

They also have the advantage of being able to switch up their sharply taloned toes from having three in front and one in back like hawks and eagles… or they can move one around and put two in front and two in back, like owls. This also gives them far more options to grab a hold of their fish. They have one of the highest catch to miss ratios of all the raptors on the planet. Over 75% success rate!

There is a price to pay, however, for these extra curved talons. It makes it difficult for them to walk on the flat ground. They can’t spread their feet out flat because of the hooks. When that is combined with the fact that their bodies are front-heavy (their legs are set back further on their bodies than most birds), it makes them extremely clumsy on the ground. Because of this you will almost never see an Osprey on the ground for any reason. If they are, they are likely injured. On the ground, to keep from falling on their face, they tend to use their wings like a walker, or like front legs. This damages their wing feathers and just makes everything worse. Any Osprey on the ground is in deep trouble.

Next… feathers. Also very different from all the rest. Osprey spend quite a bit of time under water because they dive for their food; but not so much time under or on the water as ducks and other waterfowl. So, because they go under water, their feathers will be much more oily. Osprey add this oil to all their feathers when they preen, from a gland near their tail. Much simplified, they nose around the gland with their beak, get their beak oily, then spread it to each and every feather they can reach. Another difference is the edge. The edge of an Osprey feather will be sharp and hard like a stiff piece of heavy bond paper… birthday card paper; not medium-soft like hawks, nor fully-soft like owls. This is because they dive at such high speed that their feathers really take a physical beating. Hitting the water is hard! As anyone who jumped off the Golden Gate Bridge can tell you, it’s like hitting cement. So their feathers are harder, stiffer, more brittle. Any bird that dives from a considerable height, to grab his dinner, will have feathers like this.

The whole feather thing is pretty fascinating. For one thing…. a feather is not just a feather. Pretty much every bird of prey has a whole set of different kinds of feathers from each other. It makes quite an interesting read. If you’d like… it’s right here: Stefan Pociask’s answer to What does a red-tailed hawk feather feel like?

What else is interesting? Well, you may have heard of the military jet that is called the Osprey. Yes, these were named after this bird for a very good reason. The aircraft Osprey is an airplane that can lift straight up off the deck of a ship, by rotating its jets. This is the same as the bird Osprey which can lift straight up out of the water! Usually with a load of fish!

There is plenty more about this amazing bird that is decidedly NOT a hawk… they are something special unlike any other. But, I’ll let you digest all that, so as to not overwhelm ya. Because… I could!

I’ll leave you with this. Here I’m giving Simon the Osprey his medical checkup and treatment. He came to us after someone found him hanging by one leg for days, upside down, with fishing line tangled around his feet, almost cutting off several toes.

Aw heck… maybe I will overwhelm ya. There’s just so much cool stuff to tell! Another reason that I love these unique birds is that they have really great relationships with each other as couples. Osprey are one of the nearly 20% of birds that are truly monogamous, in that they mate for life. When they fly south, often to Argentina, they split up and most females winter a few hundred miles further south than the males. So they spend winters apart. When they come back north, the males head back first and find the same nest they used every year, and start building it up more… preparing for the wife to arrive. By the time she arrives the husband has everything ready for her to settle in. She does the final touches; picks out the curtains and stuff. Then they fool around a bit and she lays the eggs. They do everything together when together.

If eagles took over their nests they will try to kick out the eggs or chicks if they are able. That’s why the husbands come back first; to try to take care of all that before she gets there. Usually the ospreys lay claim first. Eagles are bigger though, so if Osprey are late they might have to rebuild elsewhere.

Still, it’s not as big a problem as it may seem. The eagles do usually have their own nests. They like them a bit wider and not as deep. The biggest issue is that both species like the exact same type of environment. In the end it’s more an issue about fishing rights and territory, than nests. And that’s a direct result of the males cutting short their vacation and coming back early to protect the homestead before anyone else gets there and starts renovating. It’s really cool how dedicated the couples are to each other and to raising and protecting a family.

One other reason I’m attached to these birds is because I can often see them right from my bedroom window, sitting on my bed like I am now. I see them above the tree tops as they prepare to make their dive into the lake beyond. How cool is that!

Finally, here is an example of using the wing tips on the ground to help him walk and balance on the flat ground. Say hello to Romeo! Welcome to my Osprey world!

Birds of prey are fascinating creatures not only to birdwatchers but to anyone fortunate enough to lay eyes on[...]

I am Oliver. At age 26, I quit my job to travel the world alone. Four years later, I’m still traveling — 15 countries and 7 continents! My goal is to show YOU how you can travel the world on your own — easily, safely, and adventurously. Contact With Me By Mail.